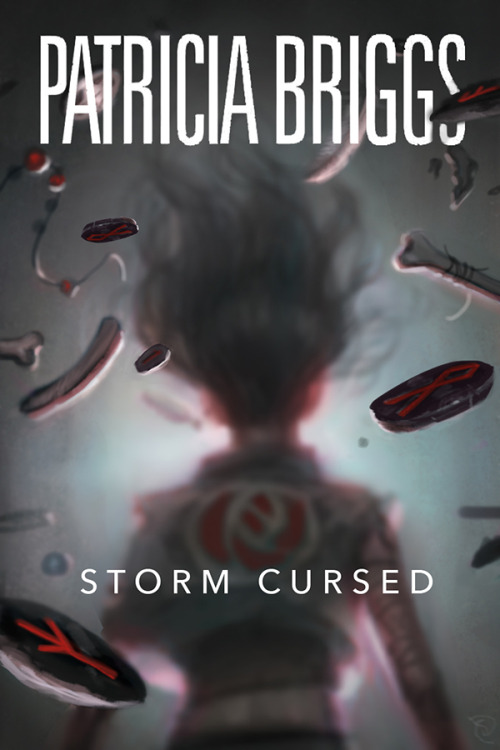 This is what happens when you take a hiatus from reading – you forget everything. Or maybe that also has to do with the concussion I sustained after the car accident.. I can’t remember where the last book started or ended. So here I am, reading the book for a second time. I do think it speaks volumes on Patricia Briggs’s writing ability, her ability to continue to captivate and continue to pull in her audience. I mean, book 11 people!! I am sure we have all read those series that just get sad. Some you can’t finish, some you make yourself finish because of the time and emotions you have put into the book but then regret finishing it. Let me tell you, this is not one of those series.

Synopsis:
My name is Mercedes Athena Thompson Hauptman, and I am a car mechanic.

And a coyote shapeshifter.

And the mate of the Alpha of the Columbia Basin werewolf pack.

Even so, none of that would have gotten me into trouble if, a few months ago, I hadn’t stood upon a bridge and taken responsibility for the safety of the citizens who lived in our territory. It seemed like the thing to do at the time. It should have only involved hunting down killer goblins, zombie goats, and an occasional troll. Instead, our home was viewed as neutral ground, a place where humans would feel safe to come and treat with the fae.

The reality is that nothing and no one is safe. As generals and politicians face off with the Gray Lords of the fae, a storm is coming and her name is Death.

But we are pack, and we have given our word.

We will die to keep it

Review:
As you remember in Silence Fallen, Mercy was captured and it was very much the ordeal getting her back. Fast forward to this book and now Mercy is training with a cutlass. Not only that, but she is having to carry it around wherever she goes… A cutlass…

I guess carrying this around with her helps everyone stay calm about her ability to protect herself.. A cutlass… This seems a bit out there and out of character for Mercy. Maybe it’s a connection to the pirate game that they mention half a dozen times in this book.. I am a bit over the game and hearing about it. But also understand it’s their ‘thing’.

I both love and hate Mary Jo. If she would just let up on Adam needing someone like his ex, someone delicate and human, I would really like her. First and foremost Adam’s ex, Christy, is the worst! She is cold, self centered, and manipulative to the bone.. Maybe it’s the manipulation piece that explains why Mary Jo can’t let go of Christy. Regardless, Adam wasn’t happy with Christy and he need more, someone like Mercy. Someone who isn’t afraid of him, makes him feel awful for being who/what he is, and someone who truly loves him. It does bother me how the Pact still hasn’t fully accepted her. Why is this still going on? I find it odd how Mercy is fierce in some situations but let’s others (ahem, the Pact) walk over her in other situations.

This book has so much going on, it’s hard to know where to start. You discover more of Sherwood’s background and see just how powerful he is. Old and new allies step forward to take down a greater threat than they have seen in the past.

Have you ever wondered why Mercy finds herself getting caught between one awful situation after another? Yes, part of it is her father, coyote, but still she can never catch a break.

“I decided then and there, without consulting my husband, that we did consider Mesa a part of our territory. If I continued this trend, I was going to make us responsible for half the state. “

I know Mercy cares about others and wants to protect everyone, but when will the line be drawn? She keeps taking on more which then makes her – and the Pact – responsible for more, and sooner or later she is gong to bite off more than she can handle. This is the one point I slightly agree with the Pact on.

Regardless of Mercy’s big heart, there is a bigger reason why she can’t seem to catch a break and this book clarifies that missing link. Storm Cursed has taken every battle, every confrontation, everything that has been brewing in the previous books in this series and connected it all together. Now instead of each book having an isolated battle, you discover the enemy behind them all and just how powerful of an enemy that is. It’s absolutely brilliant!!

I am so torn when it comes to Wolfe. Anyone else feel this way? He is such a scary psychopath. But there is a side to him that interests me. The more I read about him, the more mixed emotions I have for him. We discover more about Wolfe’s magic and it’s not what I expected it to be. Maybe that’s because he’s also a vampire which in a way is magic itself? Even though he is frightening and unpredictable, I found myself smiling and even laughing a little at some of the scenes.  I also found great sadness in the kind of person he was and who he is now. He is such a complex character and it will be interesting to see what Patricia Briggs does with him. I really hope Mercy doesn’t have to end up killing him.

And then there’s Elizaveta. Wow, I don’t even know where to begin with her. I can’t say I liked her as a character but after reading this book I can now say with 100% certainty that I really don’t like her. So many secrets she kept hidden.. Then there was the kiss and what followed next had me glued to each word! I could not believe what I was reading. Wow, just wow. I wish I could say more but I don’t want to give away too much 🙂

It did feel like some of the same information was over shared in this book. Yes, we get Mercy isn’t happy about the bond to Stephen. We know the in’s and out’s of how magic affects her differently. I guess it felt like there was some filler information that wasn’t needed. Overall I enjoyed this book. As always, Patricia Briggs doesn’t disappoint. Her writing is captivating and I love the depth she puts in each of her characters. I always get sucked in reading her books and for good reason. This book did feel like it was headed for a bit of a slump. But the ending pulled it together. I am looking forward to the next installment.