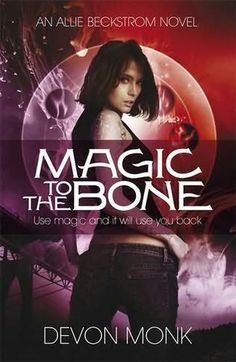 This is one of a couple books a store clerk talked me into buying. Unlike the others, this one was actually a pleasant surprise 🙂 For me, this book was a page turner – didn’t want to put down and stayed up way too late kind of book. I love a good series that you don’t want to put down.

Where to Buy:
Amazon

Synopsis:
Allie would rather moonlight as a Hound than accept the family fortune – and the strings that come with it. All magic use has costs — hers include migraines and memory loss. She finds a boy dying from a magic Offload with her father’s signature, then her father is murdered. Allie’s search for the truth calls on her country friend and the handsome man originally assigned as her bodyguard. Someone is forging magic signatures — and hers is on her dead father.

Review:
The book opens with a very much down on her luck Allie and the death of a young boy. For Allie, being twenty-five, broke, and in debt does not make for a comfortable life. Add a crazy and powerful – very powerful – father into the mix, and Alli’s life isn’t great.

All Ailli’s ever known and associated her father with is hate. I can’t imagine having such strong and negative feelings for someone whose supposed to love and care for you. That makes me so sad and I mourn the missed relationship that could have been.

Allie’s character is strong and by far imperfect. In fact, she makes a LOT of really stupid decisions based on some impractical logic of hers. But she has a big, loving heart… that can also get her into trouble. Allie is a hound with an impressive ability to trace a spell back to the person who sent it. The downside is every time she or anyone uses magic, it comes at a cost. For every spell cast, there is an Offload of equal measure. Small magics might result in a migraine; large-scale magics might mean death for the caster. As you can imagine, Allie uses a lot of magic in this book and is constantly battling the Offload.

Allie’s character is complicated and honestly has a continual string of bad luck. She is accused of murder, discovers magic isn’t black and white but can do many improbable things, gets betrayed (A LOT) and is constantly fighting for her life. Her life is tough, she has been through a significant amount of trauma, and at times she can come off a little jaded. To say the decisions she makes doesn’t always makes sense, is an understatement but one that makes sense considering the amount of trauma she has been through.

Okay, I will be the first to say I hate the instant attraction kind of story plots. But there is something about the writing and the way the author describes the passionate kiss between Allie and Zayvion, that makes me want more. To be honest, I think their connection is part of why I like this book so much. Zayvion’s character is strong, sexy, and so very complicated. It’s almost like Allie and Zayvion are both broken and work so well together because of it.

The book is written in third person, passed tense, which for some reason makes this book stand out from the rest of the books I’ve recently been reading. I will say the author added twists within the plot I didn’t see coming and that’s refreshing. One of the things that stands out from the plot is Magic and the mystery behind it all. I find it all very fascinating and my curiosity is peaked.

This book really caught me by surprise. I am interested in this series and wondering where the author will take it. I loved the connection between Allie and Zayvion. I still don’t think we’ve gotten the full picture of who Zayvion is, but I am looking forward to finding it out. This might become one of my new favorite series. Time will tell 🙂

One thought on “Magic to the Bone (Allie Beckstrom, #1) – Book Review”